Primitivo wine is our passion

"...the most interesting and distinctive wines [in Puglia] tend to be Primitivos from Manduria..."

Beato Vini is a boutique winery located in the center of the Primitivo di Manduria DOP zone in Puglia, southern Italy. Primitivo is one of Italy's greatest varieties, particularly when grown on the iron-rich soils of Manduria. We produce original wines from our organically grown vineyards. Primitivo is our passion.

Sant'Anastasia is our flagship wine, and it is produced in the heart of the Primitivo zone. Named Sant'Anastasia, after the road along the oldest vineyard of our estate 'Contrada Son Stasi', it is our personal expression of what the greatest Primitivo di Manduria can be - layered, complex and elegant with lift, freshness and a caressing, velvety structure. We also produce a tiny amount of Riserva in exceptional vintages.

About Puglia - The Adopted Home of Primitivo

Known colloquially as "the heel" of Italy, Puglia (or Apulia, its ancient name) is Italy's most south-eastern province. It is a historically rich region that can trace many of its roots back to the Mycenaean Greeks (1600 B.C.), the Spanish, Venetians, Turks, Arabs and others.

Today, Puglia is a prominent agricultural region, which produces 40% of Italy’s olive oil. Just as important, Puglia is also Italy's largest region for wine production, boasting 25 wine DOPs and is the adopted home of Primitivo - one of Italy's greatest grapes. DOP stands mit for "Denominazione di Origine Protetta" or "Protected Designation of Origin", a guarantee of its place of origin. 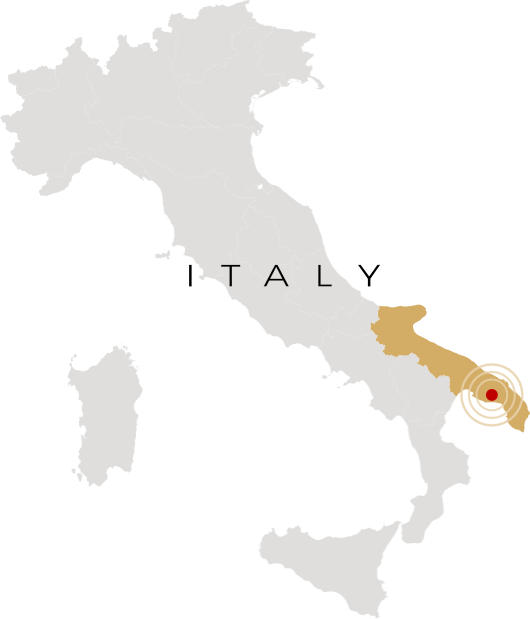 We are devoted to making one of the region’s most expressive, complex and age-worthy wines that captures the best of Primitivo.

We work close to nature, sustainable and mainly manually. We do not use any chemical fertilizers and pesticides. Equally natural we work in the cellar, where no additives and chemicals are used (exception: disinfection of the barrique with little SO4). All our wines from our own production are natural wines.

For Switzerland and Germany

Keep in touch, follow us on our social media channels.